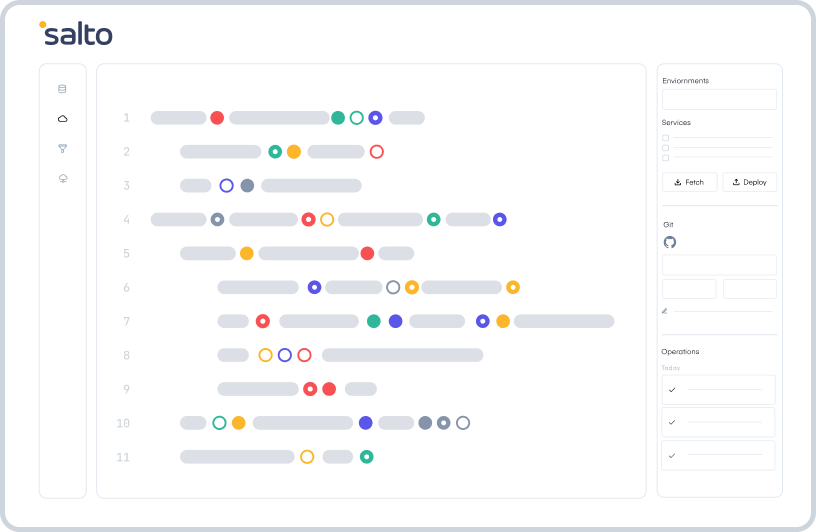 Eran and his co-Founder started Sweep to solve a challenge they’d now faced three times—allowing business users like a VP of sales who couldn’t code the power to build in the CRM.

“Our first startup, we scaled to dozens of CRM users. Our latest one, we grew to a team of 10 CRM admins. Always, things would break, every CRM change was hard, and every addition was difficult,” says Eran Kirshenboim, CTO and Co-Founder. “We realized lots of companies had similar needs. We wanted to templatize CRM best practices so the most useful components would already be built for you.” Their challenge? Building the layer of abstraction over such a complex tool—the CRM—could be as complex as building the CRM itself, and require lots of upkeep.

Eran and team were ready for this challenge, but during due diligence, discovered they could leapfrog ahead without having to reinvent an important component.

“Right away, we realized, ‘Hey, here’s an open source project that’ll allow us to move faster on all Salesforce-related stuff,’” says Eran. “It was fantastic. The framework and syntax seemed very mature and were already a year and a half into development. It was a real win.”

Salto’s open source component allowed Sweep to download entire Salesforce configurations onto a local machine “in a textual way, not in awful XML,” says Eran. That provided a foundation. Rather than build all that functionality into their own platform, Sweep’s team could build upon this open-source component and talk to Salesforce through Salto’s API.

Moreover, Sweep's system could easily and programmatically generate and edit Salesforce configuration elements without needing to deal directly with the Salesforce API. There's a lot of logic that goes into making those changes correctly that the Sweep team now wouldn’t need to worry about. As an added bonus, the integration was a breeze because both Salto and Sweep are fully implemented in Typescript.

Eran and team also found it reassuring that Salto’s open-source component is actively maintained by Salto, which has its own SaaS platform built on top of it. “There was no fear that there’d ever be any crazy changes that’d break everything,” says Eran. “We found the whole thing to be quite mature. Even if at some point they did change everything, we could always continue using an older version, which is the beauty of open-source.”

Eran says he finds it difficult to quantify Salto’s impact in strict time savings, but the difference is immense. “One of the actions we offer in Sweep is creating a field in Salesforce. I could develop that myself—I could wrap the Salesforce API—but it’s much more scalable to have a product like Salto where it’s just, ‘Create a field’ and it’s done,” says Eran.

“It’s not like we have a ‘before Salto’ world and after. But I can give an example,” he says. “Right now we’re going to build something that’s not supported by Salto, and not supported by design. This is the first time we’re not using Salto to make a change to the Salesforce environment, and it’s giving us a vast appreciation for all that Salto has already built. Salto’s Salesforce project is probably thousands of hours of work already done for us.”

Additionally, Salto offers more functionality than Eran and team presently need, which has turned out to be a huge, freeing benefit. Had they developed a Salto-like system on their own, Eran says he’d have built minimum viable, lightweight components. If they then needed to add something, they’d have to refactor that entire component, piece by piece. “Every iteration would have been vastly more work,” says Eran. “And on top of it all, Salto has made lots of smart optimizations I wouldn’t have bothered to do. Things are just so much more performant when you’re working with a mature product like Salto."

On top of all that, Eran’s team appreciates the way Salto was coded. “The code we work with in Salto is a delight. We love how it’s built and the way it’s documented. There’s a small learning curve, but once you get some instruction, it’s just great,” says Eran. “We had an issue so we started poking the code and the answer was right in there. The fact I could dig into the code and find an answer means it’s very well written. It anticipates our needs."

Next, Sweep is working on Salesforce reports and dashboards. Says Eran: “We’re doing it 100% through Salto.”

Sweep is a software that lets business users configure their existing CRM through a friendly “what you see is what you get” editor. Basically, it’s a friendlier interface for Salesforce. It came about after the two founders realized that in their prior three companies, CRM deployments and management were a major time suck. But of course, building a software to configure something as big and complex as a CRM isn’t easy, and the founders were on the lookout for scalable fast-cuts.

1 engineer completed the work of 3

A ready framework with clever optimizations

“Instead of having three people work on a reporting feature—one wrapping the CRM API, a second building reports, and a third building the front-end, I can just assign one person with Salto.”