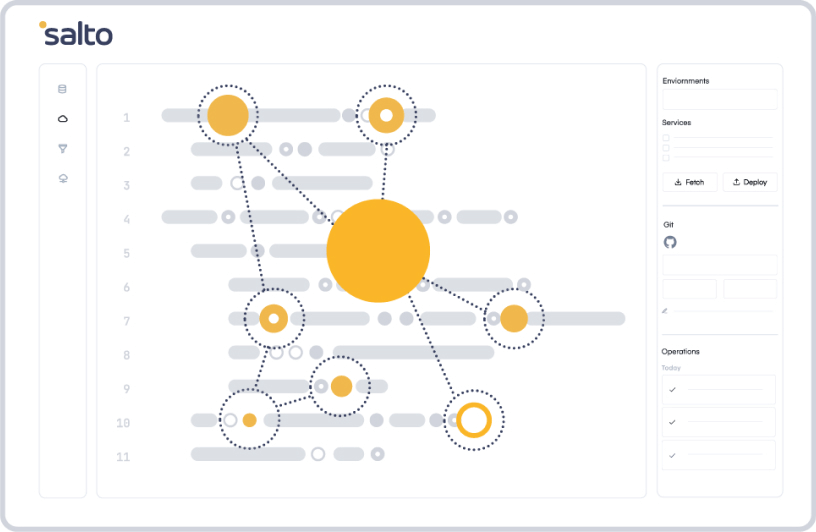 WalkMe has been using Salesforce for almost nine years. During that time, the application evolved rapidly and the information systems team continually customized it to incorporate much of the company’s own business logic and processes. They added and connected many classes, custom fields, objects, and custom logic to accommodate requests and keep up with incoming business needs.

Recently, WalkMe underwent some organizational changes that required a substantial update to Salesforce and other applications. The update, however, posed a serious challenge to the company because of the many hands that touched the application and the level of customization applied throughout the years.

When customizing the application previously, the team had created a picklist field called Market Segment that appeared in many places throughout Salesforce and Pardot, as well as in other applications.

Typically, each picklist value has two strings: Label, which is easily changed and displayed in the user interface; and API Name, which is an ID that should not be changed and is only available to developers and admins. The values in the Label and in the API Name are usually identical, but in this case, the WalkMe team’s customizations had resulted in different string values. While the non-identical values created contradictions within the application, the team had developed workarounds and other manual practices and checks to make the issue tolerable in the short term.

Faced with a massive Salesforce update project, however, and an extremely tight deadline, the WalkMe team didn’t have time to manually find and update every place the affected field was used within Salesforce. They urgently needed a solution that would allow them to quickly identify all the affected fields; understand the relationships to other fields, objects, rules, and workflows; and allow them to confidently make the needed changes in bulk.

WalkMe chose to use Salto, which would enable the team to do a search and immediately identify all of the affected fields within the application and then automatically replace them with new values in bulk.One of the features that gave WalkMe confidence in its decision was Salto’s built-in Git client that enabled versioning and, as a result, the capability to roll back to a previous version if needed.

Fetch
The process began with a Fetch operation, which extracted the company’s entire Salesforce configuration setup and translated it to code and text files.
02

Find & Replace
The team added the new value to the picklist and used the Find & Replace operation-which resulted in finding about 90 occurrences of the original, non-identical value.
03

Change
The string values were then changed so that all formulas pointed to the new, correct value.
04

Review & Deploy
The WalkMe team reviewed Salto’s deployment plan that was based on the Find & Replace operation, and then used Salto to deploy the new values for the API Name strings on their Salesforce account.
05

Complete
To complete the process, the WalkMe team updated the data records by deleting the old value.
06

01
The process began with a Fetch operation, which extracted the company’s entire Salesforce configuration setup and translated it to code and text files.
02
The team added the new value to the picklist and used the Find & Replace operation-which resulted in finding about 90 occurrences of the original, non-identical value.
03
The string values were then changed so that all formulas pointed to the new, correct value.
04
The WalkMe team reviewed Salto’s deployment plan that was based on the Find & Replace operation, and then used Salto to deploy the new values for the API Name strings on their Salesforce account.
05
To complete the process, the WalkMe team updated the data records by deleting the old value.
06

The Salto solution turned what could have been a “nightmare project,” in the team’s opinion, into a seamless, hassle-free operation. Moti Ben Moshe, Salesforce Team Leader at WalkMe, estimates the project would have taken about 30 days to complete, if done manually. Instead it took seven days from start to finish, out of which just 12 hours to make the actual changes. Now that the team is familiar with the Salto solution, Ben Moshe says they could cut the initial seven-day period down to less than three.

Without Salto, WalkMe would have had to deal with a lot of friction and discrepancies. A manual process would have been prone to human error, and taking 30 days to build the change set in a sandbox environment in such a dynamic company would mean the production environment would look very different when the sandbox data was deployed back into it. Ben Moshe believes that the month-long window could have created at least 15 discrepancies in the system. And only after that month of work and final deployment would the team be able to see if the changes were actually implemented, identify any discrepancies, and know whether they had broken other processes in the application.

Instead, with Salto, Ben Moshe could put a halt on work within the production environment for just 12 hours--ensuring he was applying the needed changes to the most updated version of the configurations.Besides the significant time savings on the project, the solution provided the team with a lot of confidence in the process and relieved anxiety about all the things that could go wrong.

WalkMe is a company dedicated to simplifying commonly used applications for enterprise users, and providing CIOs and executive management with visibility into the tech stack. With a vision to "match the capability of people with the capability of technology,” it created the world's first digital adoption platform that enables organizations to measure, drive, and act to maximize the impact of their digital transformation, and ensures employee and customer adoption of business-critical applications.

"Using Salto helped us complete an important task that we have been avoiding for a long time. What impressed me the most was that all of that heavy lifting was done very smoothly, without breaking a single thing in the process."